Today was the 4th of July, our Independence Day.There is so much meaning behind that, so how do you respect and enjoy it at the same time. Lives lost, a new country, being proud of being an American. People seem to being going in so many directions on this day.  We decided to honor our country by wandering around the first National Park. We should have left more time for the park, but we only had one day so we chose the south west corner of the 3,500 square miles of the park.

We were staying just outside the Grand Tetons so we thought it would be an easy day trip. Since we are not doing an entry on the Grand Tetons or Jackson here are a couple pictures from there.

It was saying it was only 30 some miles to the park and so we thought easy.  Well, the mph is very slow for the wildlife and then you have another 20+ miles after the entrance to get to the main loop which is 142 miles itself. Here is a map:

Our first stop was Old Faithful, this was a must for me and it didn’t disappoint, even with the hoards of people there.

I didn’t know much about Old Faithful’s eruption times, so we just went straight there and saw all the people, so we thought it must be happening soon.  Sure enough, about 15 minutes later it went!  Someone told us after that the current prediction was 88 minutes, so we were glad we got there when we did.

We then took a walk on the path through some of the other pools and geysers close by. This one was my absolute favorite! 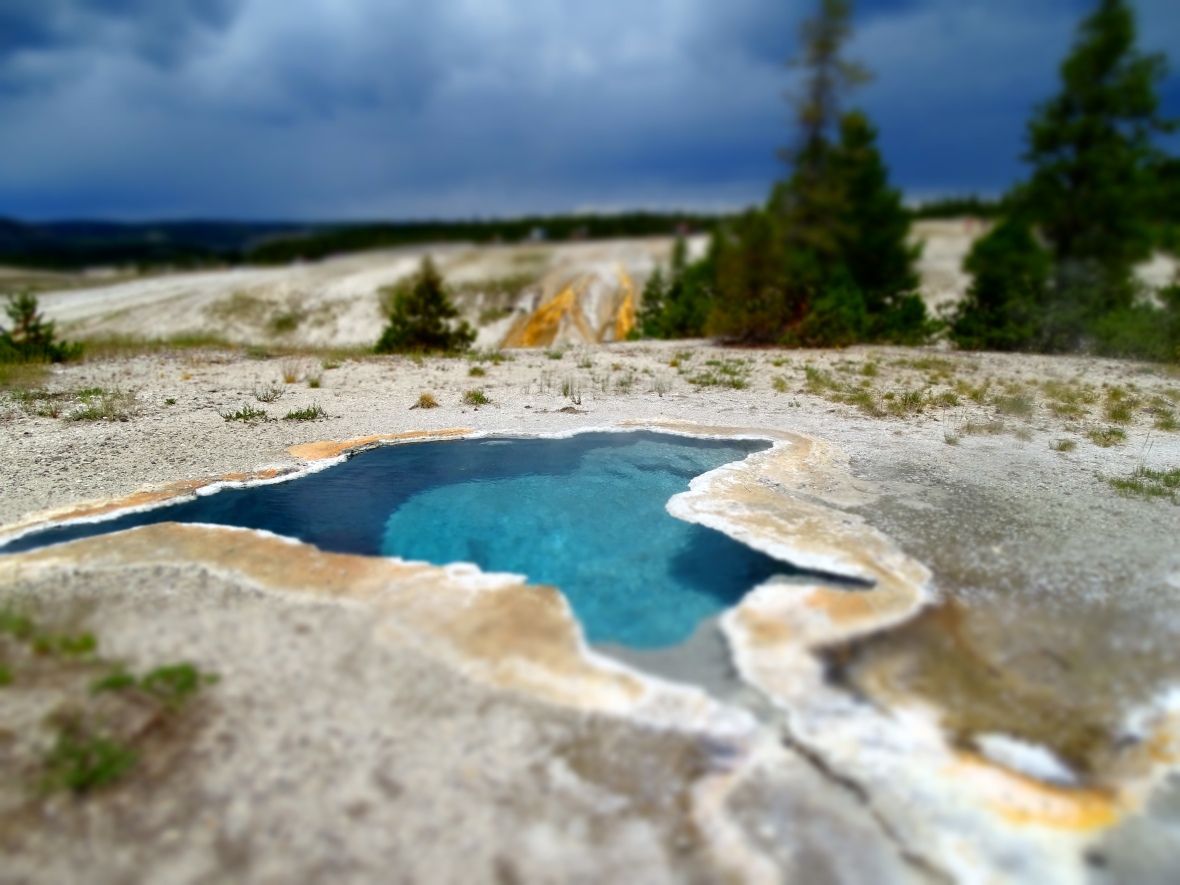 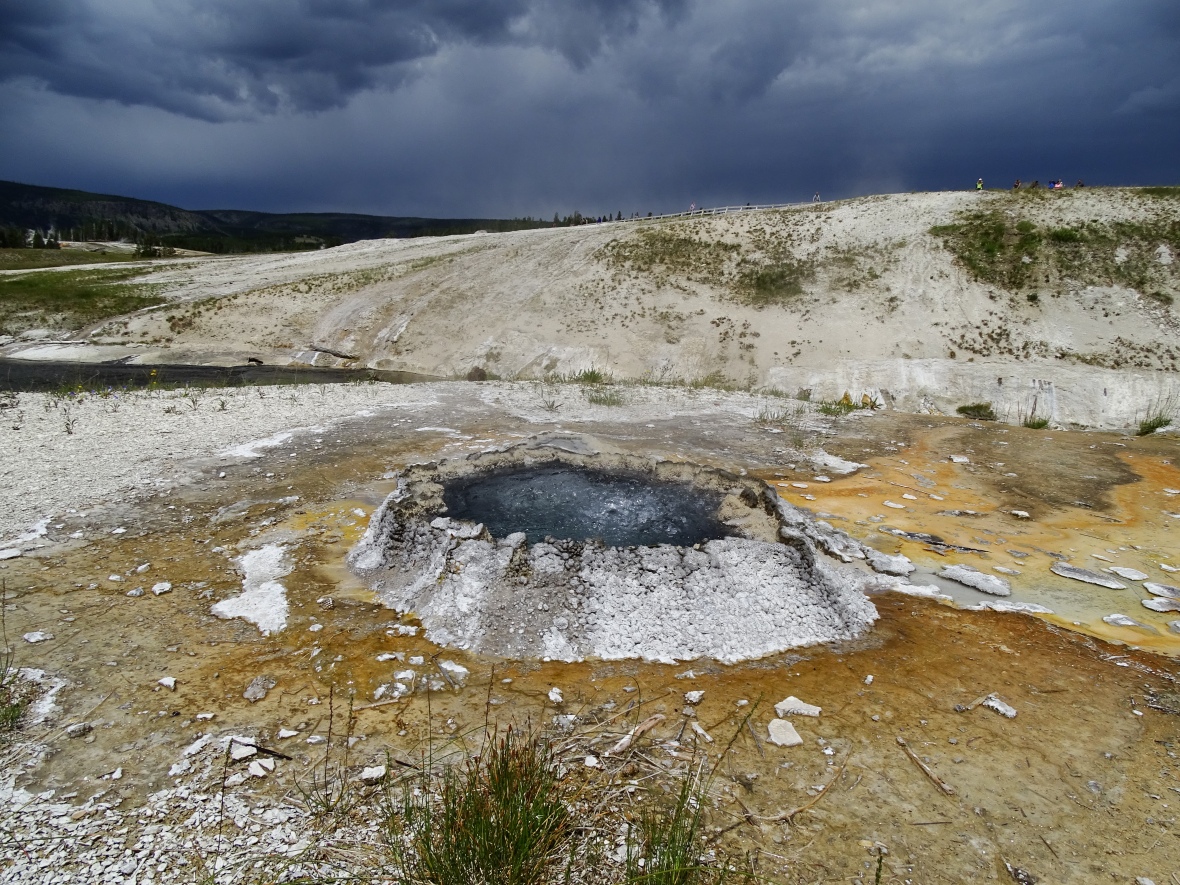 This area is set up like a small town. Lodge, gas station, auto repair, restaurant, visitor center, gift shop, and market.  We had lunch at the grill and it was really cheap for the location.  The food wasn’t the greatest, it felt like the burger and fries I got in my high school cafeteria, but it was good then.  It was already a cloudy day but now it started to sprinkle and there was so much more we wanted to see, so we got back to the overflowing parking lot (which did have RV parking but good luck getting one of the spots) and headed towards the Midway Geyser Basin.

This is where the popular Grand Prismatic Spring is which is the largest hot springs in the US. It had started to down pour and so we didn’t actually get to see any of the pools, we got a glimpse of the beautiful blue in the Turquoise Pool, which is the first pool you reach along the half mile pathway. The Opal pool is next and then the Grand Prismatic Spring.  Even though we didn’t get to see the pools, the steam created some awesome pictures.

The pathway went through the thick steam, making it feel like we were in a different world.

As we were driving in we saw these falls and passed by, but out of the corner of my eye I saw them and knew we had to stop and so we said we would on our way back rain or shine.  They are not the grandest or the most beautiful falls, but there was something so calming about them, so captivating that we just sat for awhile taking it in. 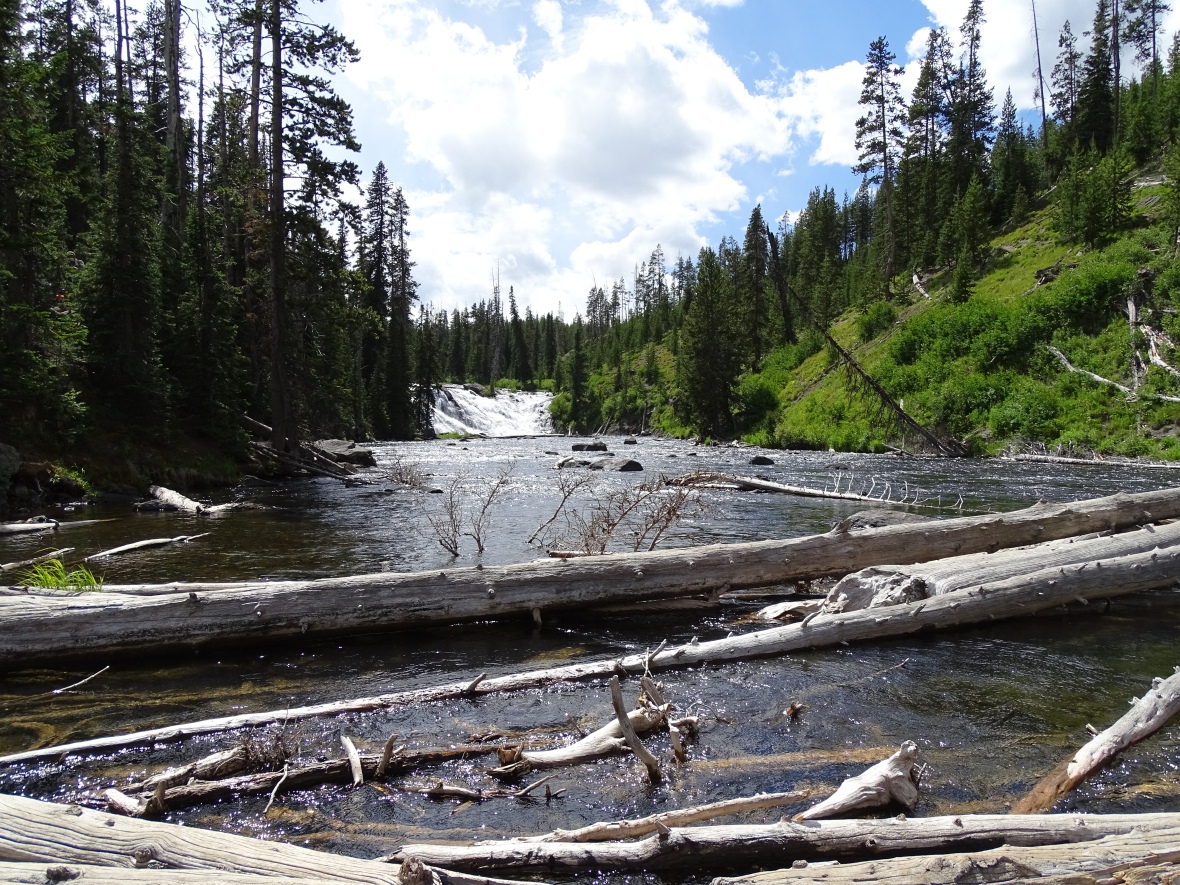 Part of our drive home. 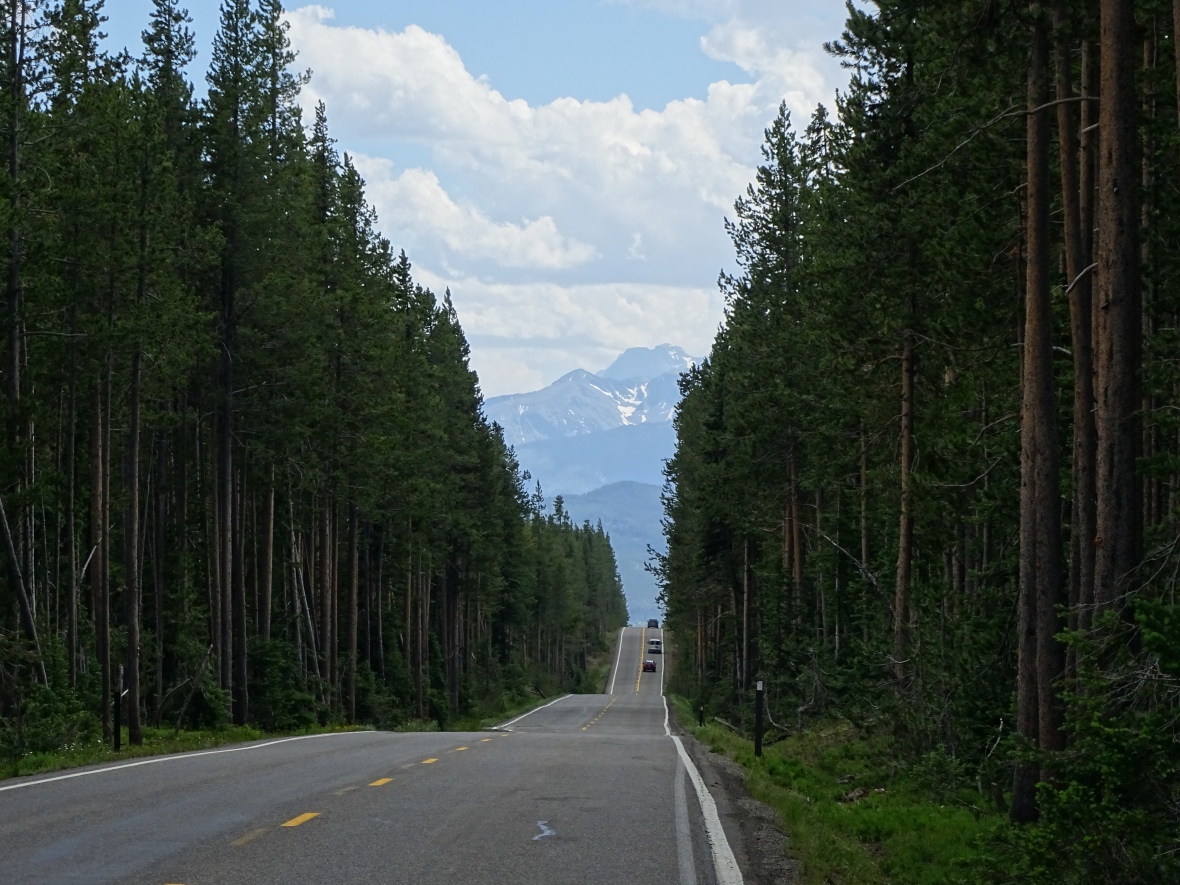 I would plan on staying in the park, even if it’s at a couple RV parks. It is so large and there are so many things to do and see it will be worth it.  Expect to do a lot of driving because of the size of the park.  Because of the weather and time, we didn’t get to see very much and we didn’t get to see any Buffalo (which were in the northeast area in Hayden Valley)!!! We will definitely be back to hit some of the sites we missed.  A couple that we are wanting to go back and see are Mammoth Hot Springs, Grand Canyon of Yellowstone, Uncle Tom and the Norris area.  Of course, any backcountry opportunity we would get we would do in a heart beat!

Start Booking Your Next Trip!

All the content and pictures are our own and belong to us. Please share and enjoy with proper credit. If you would like to use for something more, please contact us! Thank you!
Bend Wine Storage

The Adventures of JB and Heather Burho

David and Keng on the Road