The excitement of being able to finally go to Zion was unbearable.  We were boondocking just east of the park, and drove in on the 9 instead of going to Springdale and taking the shuttle in.  The drive was beautiful and there were some Bighorn sheep that were crossing the road:

You also get to drive through the 1.1 mile long tunnel.  Bikers and hikers are not allowed inside the dark tunnel, so you might see some hitch hikers trying to catch a ride to the other side.

The Visitor’s Center does not have a lot of parking (which we did not know), but we were able to park in the RV/oversized vehicle lot.  Zion has a shuttle service with a total of 9 stops.

After checking out the trails that you could take we decided to try Emerald Pools Trail.

At the trail head there is a ice cream shop and market.  The trees there were making it look like it was snowing!

It was a moderate 3 mile hike round trip, and hikers and families of all ability levels were on the trail.  For us, it was a bit too crowded, even mid-week in off-season.  We had minimal time to enjoy the views and Emerald Pools with all of the people there. 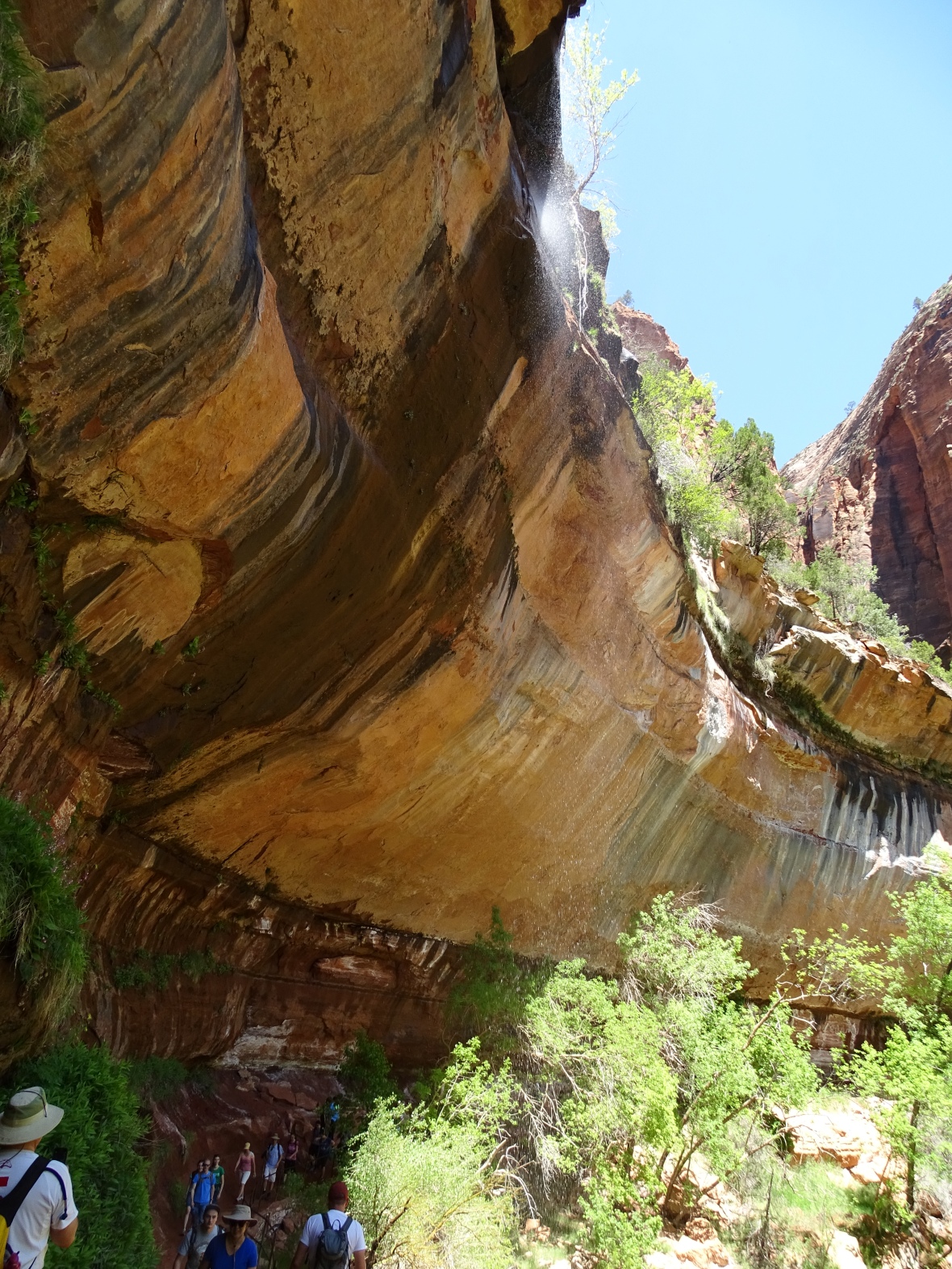 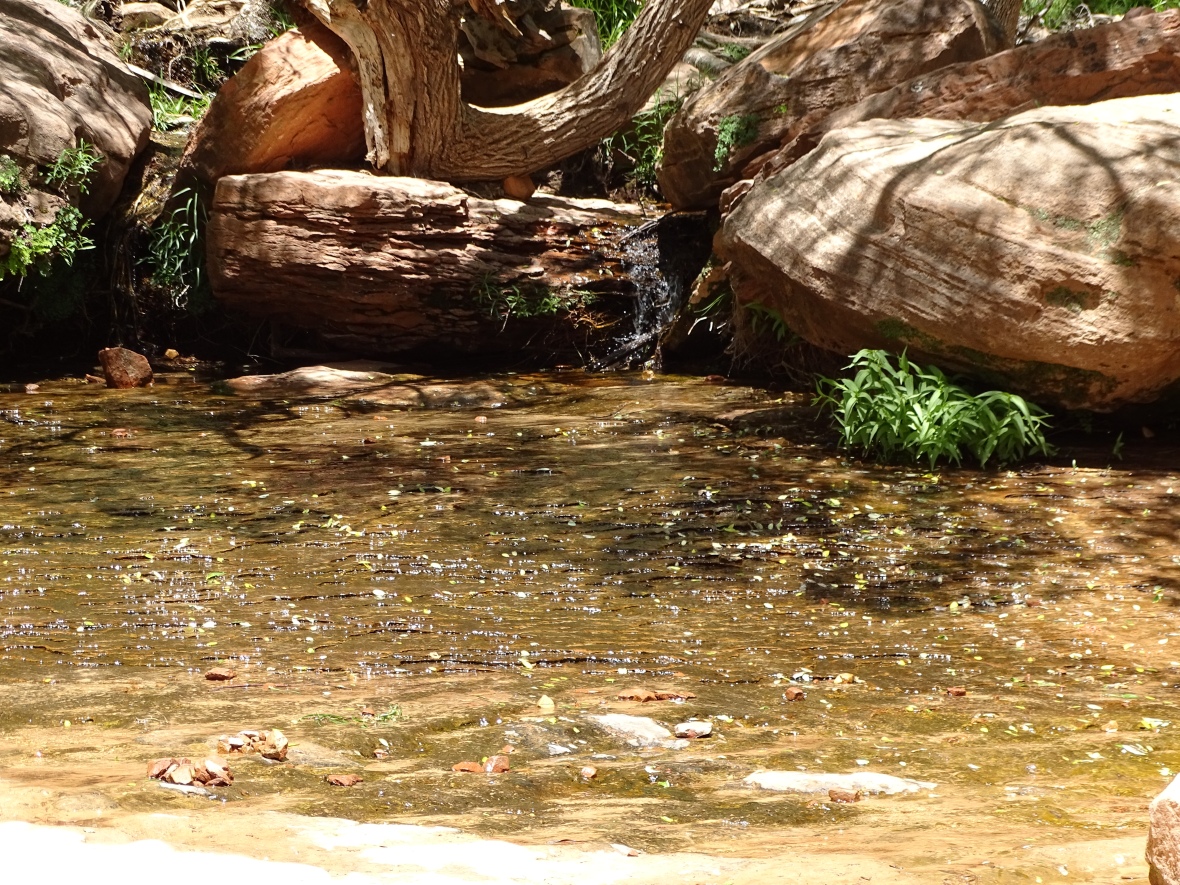 They ask that you don’t swim in the pools.  People seemed to actually mind that, but they were climbing the rocks behind it.

After getting away from the crowds we did a little extra and hiked to the Grotto, which is the start of the trail to Angel’s Landing.  I was still a little scared of the 1,000 foot drop offs so we took the shuttle to the last stop of Temple of Sinawava.  There are no picnic tables here and we figured out why.  As soon as we sat down to eat we were bombarded with squirrels.  It was annoying to say the least and I was a little freaked out by them.  Some of the tourists were trying to touch them and get them to come up to them.  This spot is also the start of the Narrows trail.  There is no trail as you hike in the river for up to a 10 mile round trip hike.  We were bummed to learn that the trail was closed due to flash flood warnings.  Check it out here: The Narrows

We decided to take the scenic highway 14 to Kolob Canyon, which is in the northwest corner of Zion.  It was a beautiful drive, that got up to around 10,000 ft.  The high elevation and cold meant that there was still a lot of snow on the ground.  We wish we would have brought our dogs with. 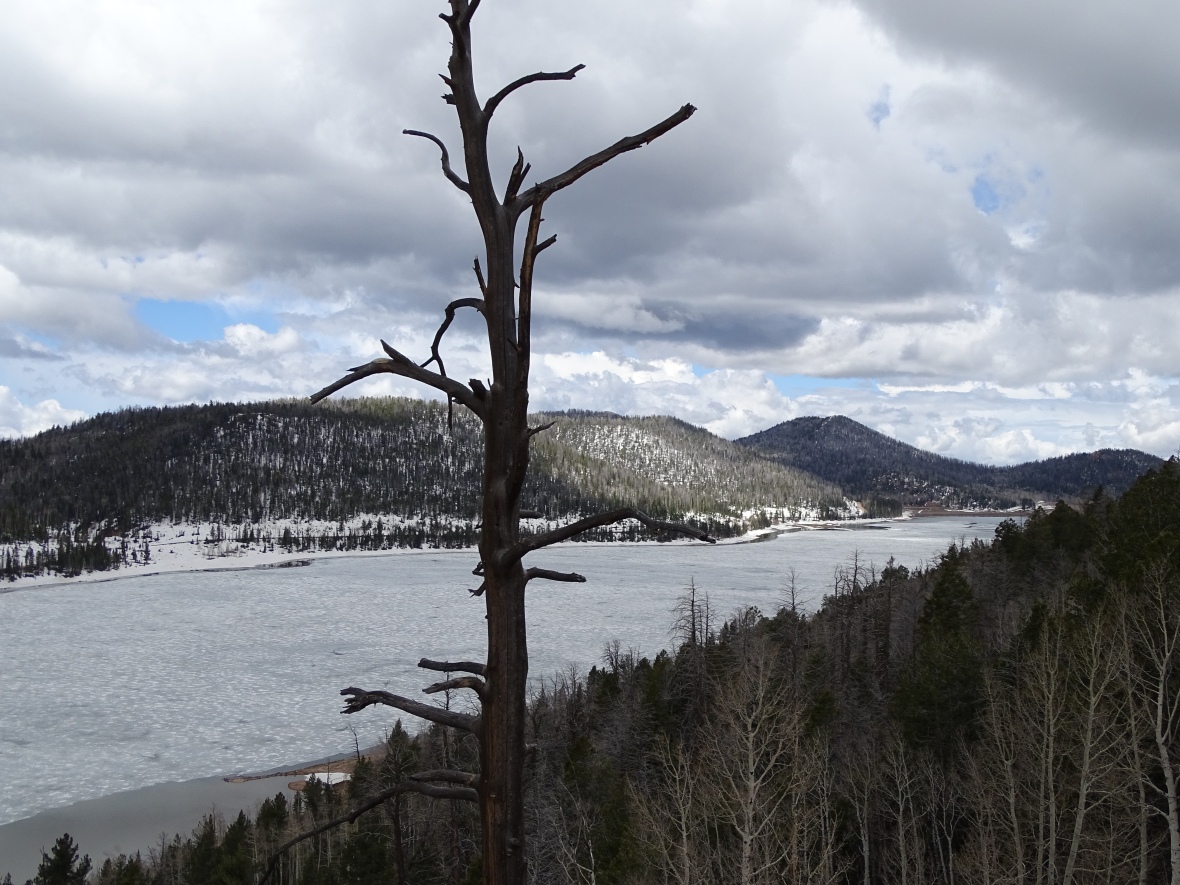 We arrived at the visitor center at Kolob Canyon and the ranger said that it was only a 30% chance of rain.  The sky didn’t look that bad so we decided on a 5 mile round trip hike to the double arches.

Within half a mile it started hailing on us!  We were troopers and kept going.  At the .8 mile marker thunder and lightning started,  so we ended up turning around.  Our hike was only 1.5 miles but it was absolutely beautiful!

This was a creek crossing.  The water was so clear!

We then drove through Springdale to enter Zion from the other side. It was the cutest town with lots of restaurants and hotels.  The Zion shuttle also starts there so you don’t have to park in Zion and pay the $30 if you don’t have a pass.  On the way out we ran into the Big Horned Sheep again!  They were coming down the rocks and crossed the road.  Again, as a tourist, respect the animals as they are wild. 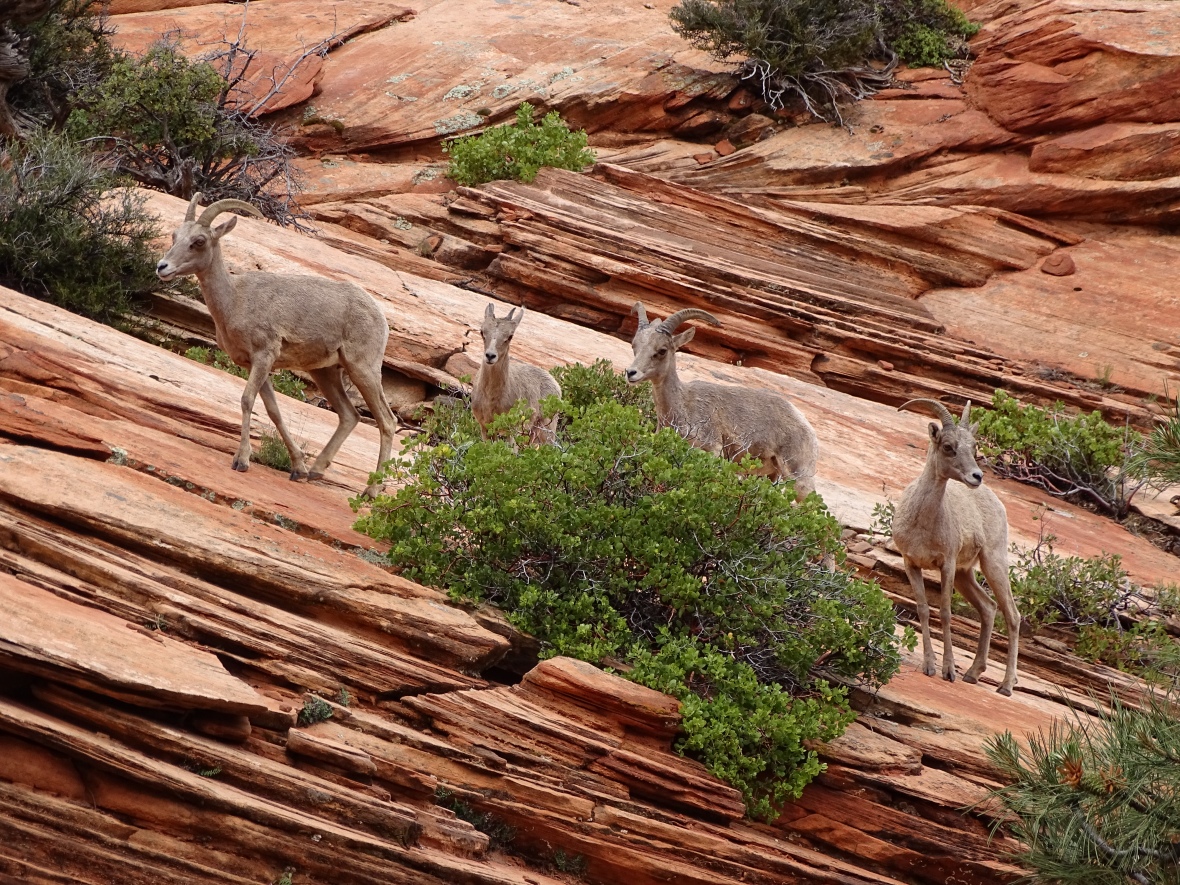 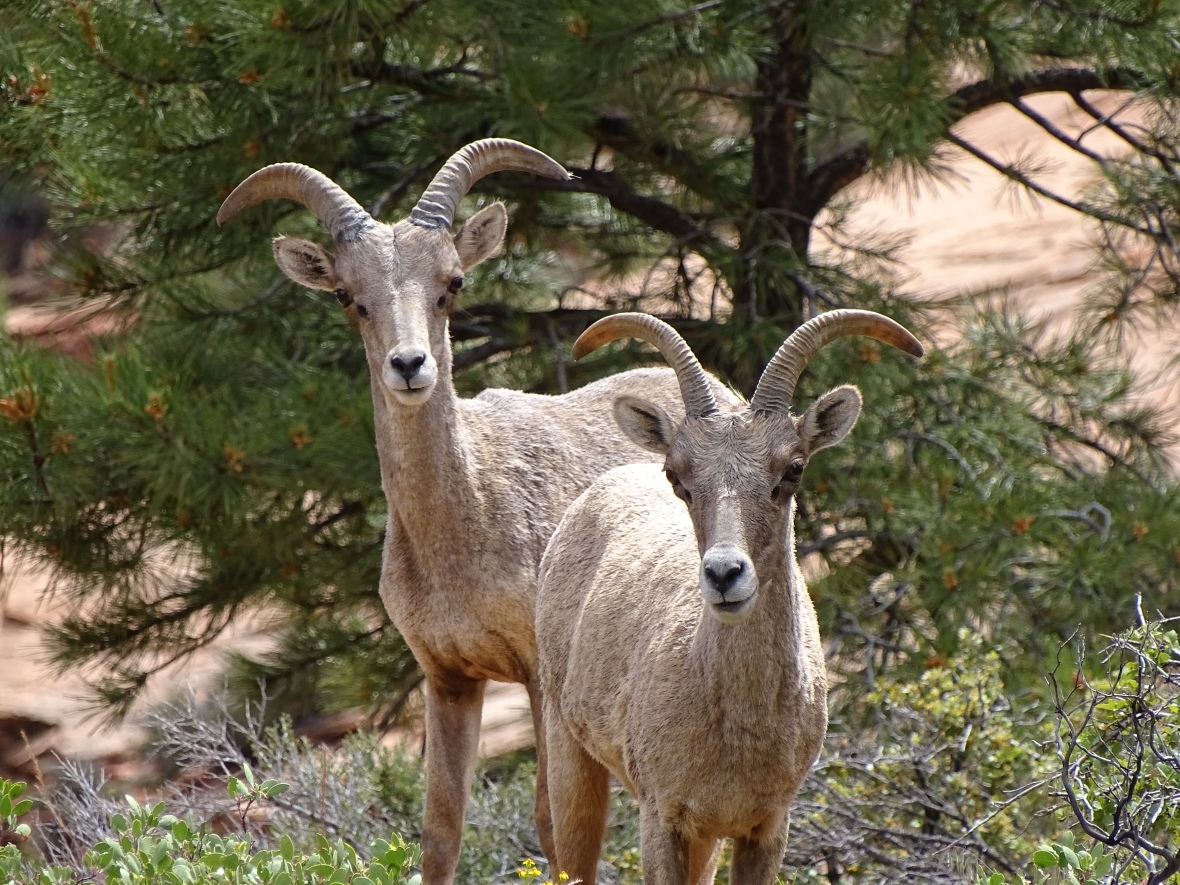 We could have done a lot more in Zion, but due to the weather we decided to push onto Colorado.  We will be back!

Happy Earth Day!
Have you hiked through a cave before?
When I wear a mask, please assume I am smiling at you. Masks have taken that away from the silent communications.
This was the best short hike we have been on.  This makes it busy, but worth the stop. If you are an early riser, even better.
Do you have a family motto?
I meant to find Double Arch, instead we ended up at Double O Arch. Worth it.