As part of the cruise, my parents set up a land cruise.  We were to spend a day in Denali National Park! Two national parks in Alaska! We disembarked and took a bus from Whittier to Denali National Park. The country side was beautiful and our driver gave us a 5 hour history lesson.  One of the coolest things was a part of the drive where the ocean water came in and hit fresh water of a river and created a tide that people would surf as it came in.  The freezing cold water is nothing to brush aside. Even with a wet suit you have to be careful. 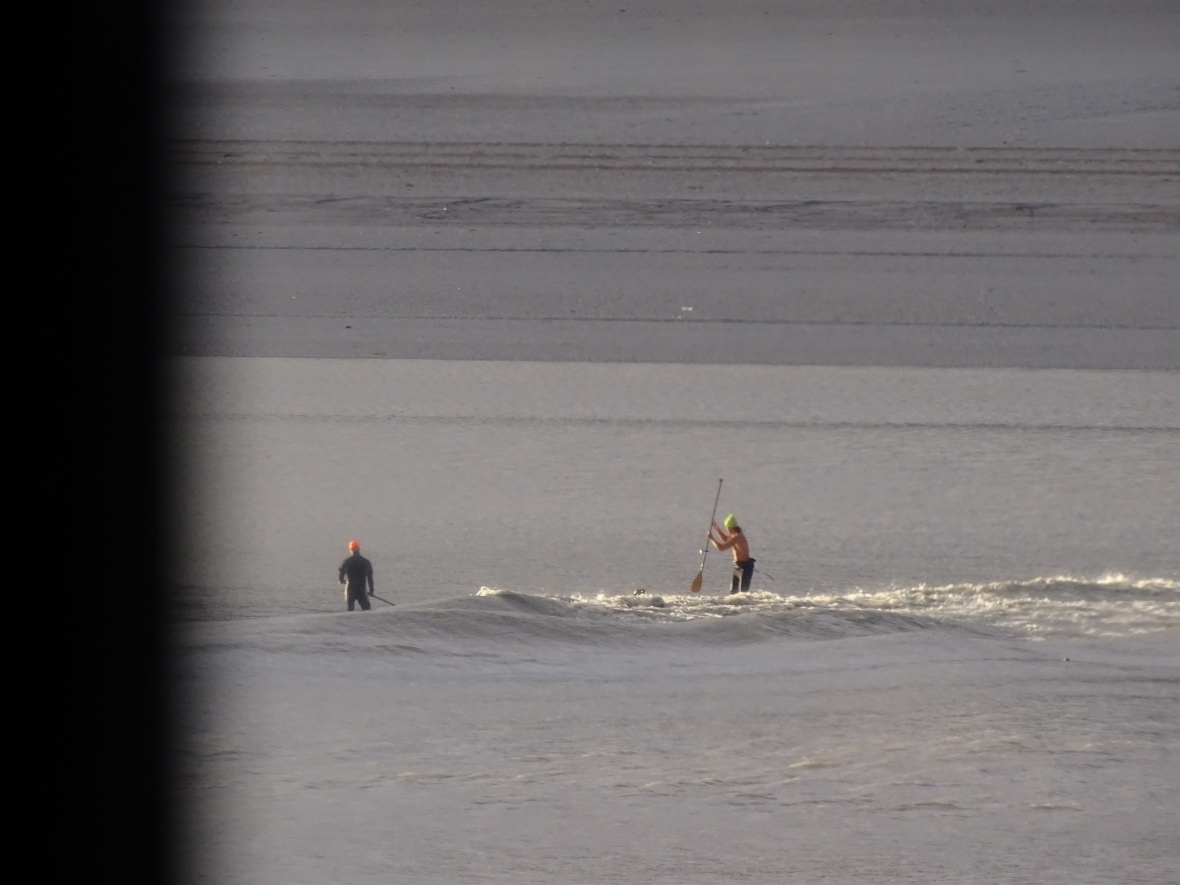 So after the 5 hours we made it to our hotel.  One of Princess’ hotels outside the park. We had dinner and went to bed early since our tour in the a.m. started at the crack of dawn.

The park has strict regulations about motorized vehicles in the park. They limit it to their buses, RVs can go to one of the few RV parks and cars can go into the park up to 17 miles. The bus schedule for non tours, hikers and back country backpackers is great.  There are formal bus stops, but if you wave down one of the green buses along the road, they will pick you up and take you back into town or to a different stop.  You do need a permit to back country camp but aside from that there are no trails, or designated areas. It truly is wild camping. Our tour bus driver said that his job is so coveted that he has been doing it for 12 years and he is the 3rd from the last in seniority and they hadn’t hired a bus driver in 10 years.

We were lucky on our tour. We saw the most animals out of any of the tours. We spoke with people before and after us that said that their sightings were limited and a couple didn’t even see any bears.  I just wanted to see a bear. I was in Alaska! A bear please!

It was about an hour into the drive and we finally saw our first animal.  It’s a bad picture, but this elk was just eating its way through the field. I was getting a bit nervous that we wouldn’t see anything else. We had already made it a good ways into the tour. 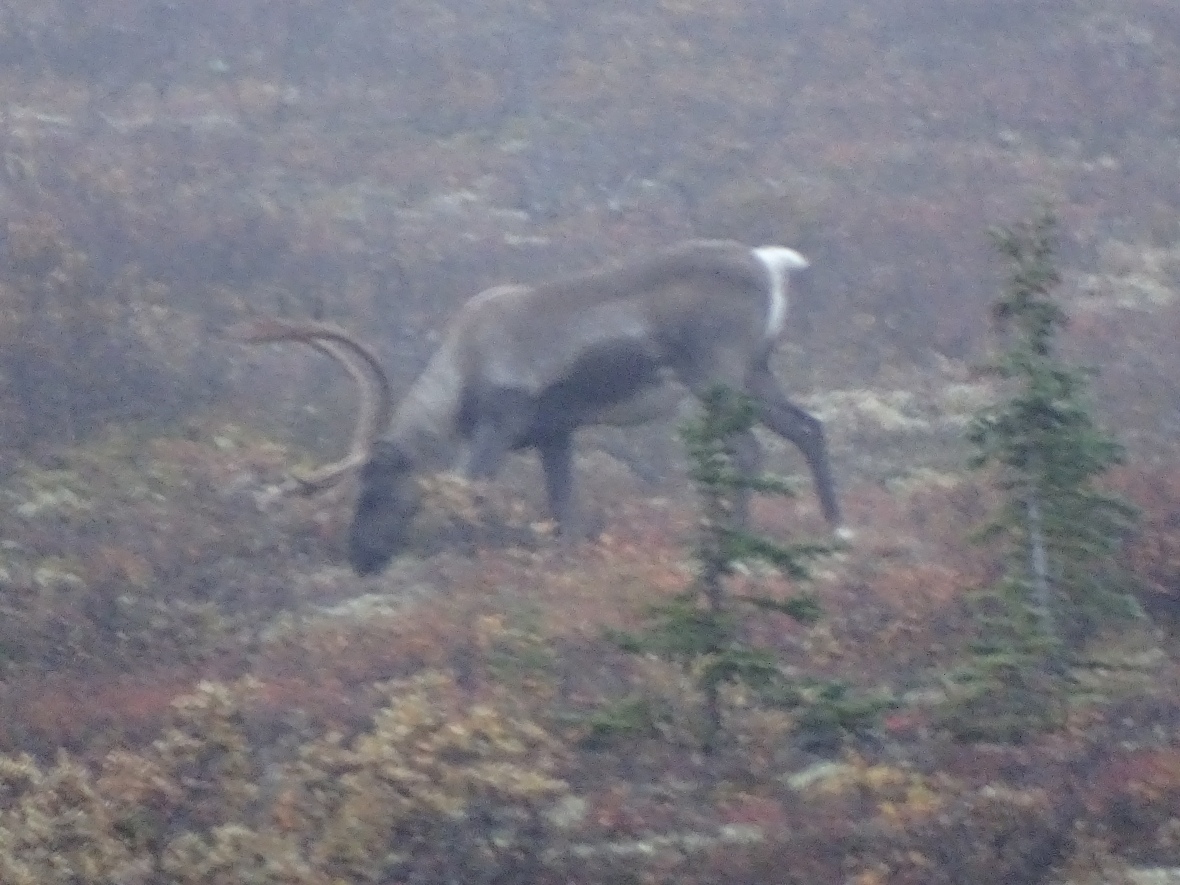 Then yay! Our first bear. A large brown bear.  My first bear ever. 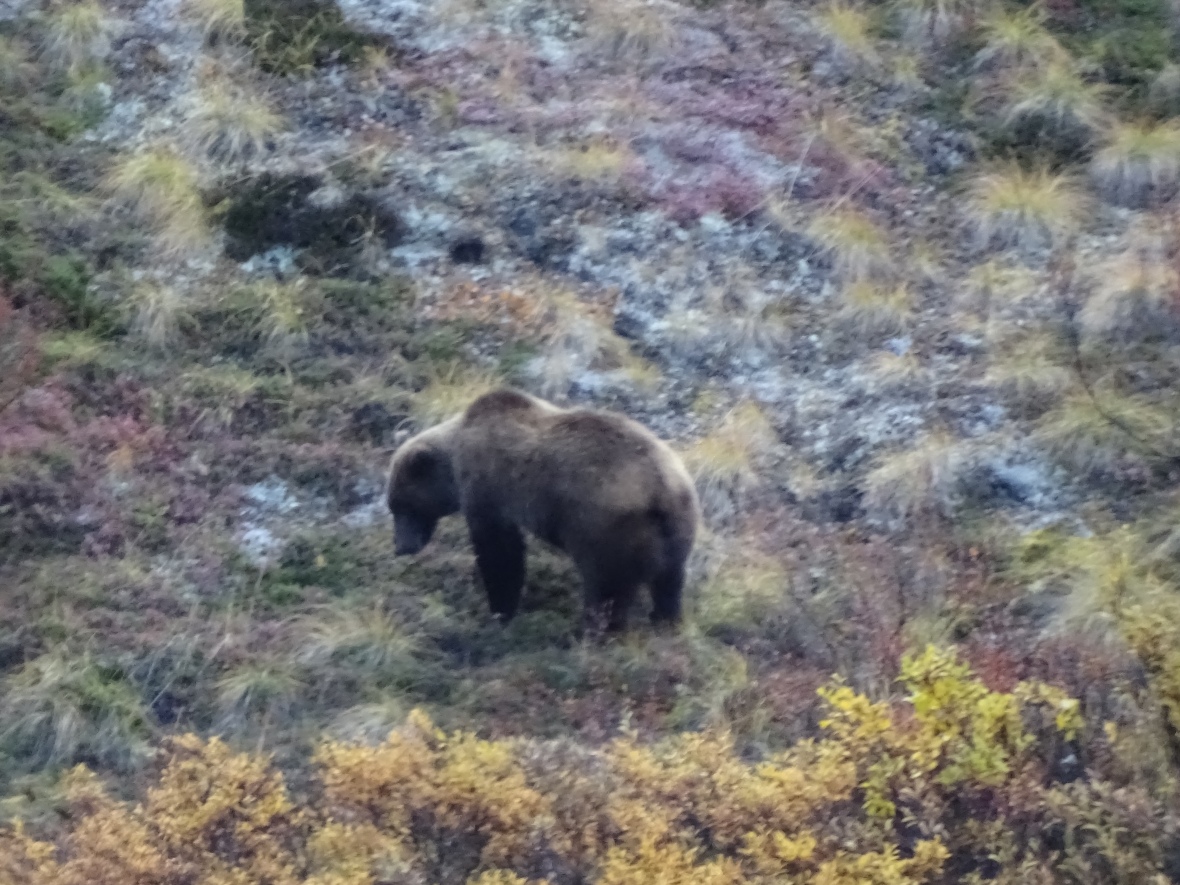 The views were simply stunning. We were above the first layer of clouds here.

Then up ahead was this large bull moose!  The driver, as all drivers, was very strict about how we acted around the animals.  We couldn’t get to close, we had to be silent as we drove by and no hanging out the windows.  He said that he would end the tour if anyone didn’t follow the rules for animals.  After watching for a little bit, he started running through the brush. I couldn’t believe at points how hard it was to see him. This large animal was disappearing.

We then reached our turn around point. The best view of Mt. Denali. This was previously called Mt. McKinley and president Obama finally signed the order to have it changed as the local people wanted for years. This summer, only 15% of tours saw Mt. Denali.  The rest of the time it is covered by the clouds.

In the distance was a small herd of caribou. 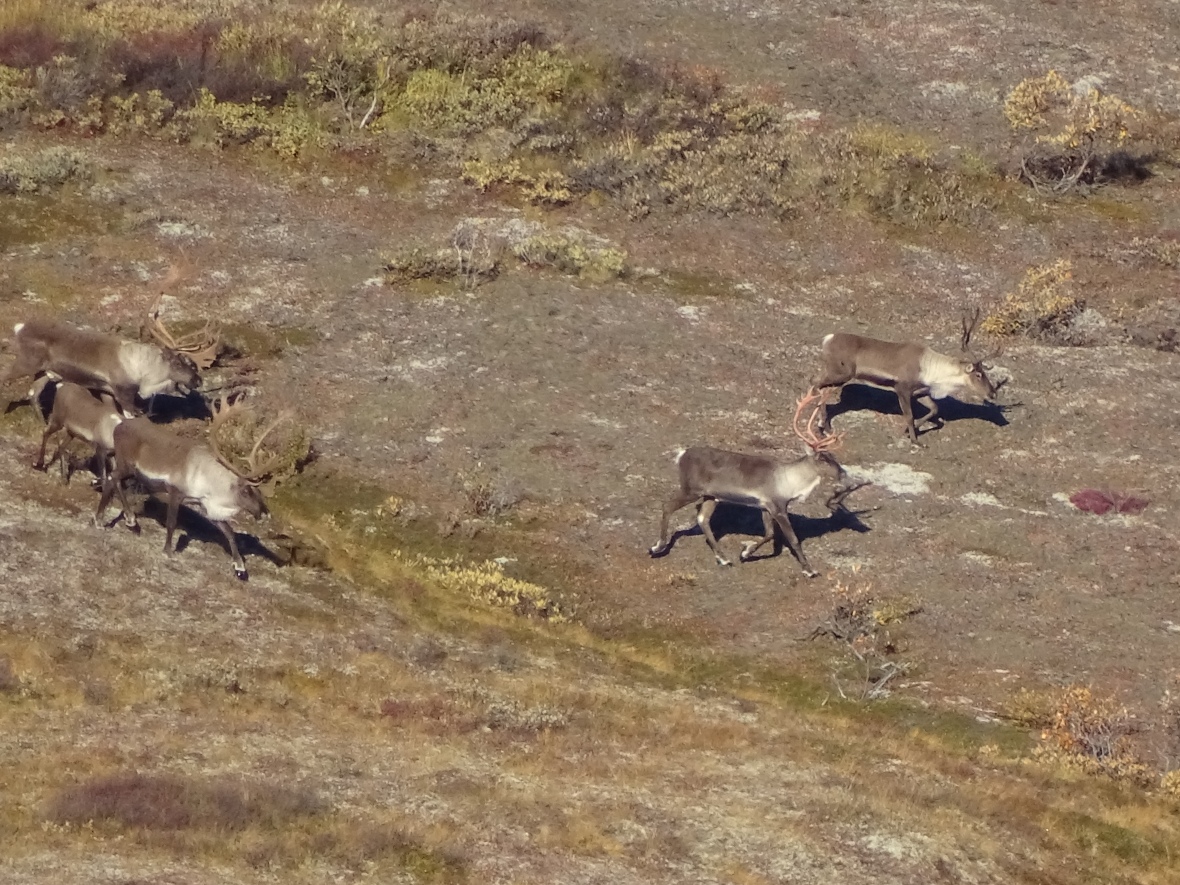 Our third bear! They were all eating by themselves as the race was on to get enough food for hibernation.  They eat up to 200,000 berries a day!

When we were almost done with our tour the bus driver stopped to show us this Arctic Ground Squirrel.  We didn’t see one on our way to Denali, but when we returned they lined the road.  These little squirrels are quite amazing.  They live in the artic tundra biome of Denali and so during hibernation they are able to lower their body temperature to below freezing. During their comatose state they slow their heart rate to 4 bpm. They were the cutest creatures and one of the most interesting of the day!

And last but not least one last brown bear!

We were definitely happy after this tour. It was quite long and they provide snacks as they also have strict rules about food in the park (of course). They also closed part of the park due to hibernation and other reasons throughout the season. More state and national parks should take after this one. Animals first, tourists last.

As we were leaving, this momma moose poked her head out to say hi. A lot of tourists were getting out of their cars and getting really close. She had a baby with her so it wasn’t the smartest. It is these people who could ruin it for future tourists. People have been hurt by these animals and they are the ones that pay the price.

We were scheduled to take the train to Fairbanks, but we didn’t leave for a couple hours so Kevin and I went on a short walk through the woods. We reflected on the day and how lucky we are to be doing what we were doing. I think I mentioned in an instagram post that when we were on the cruise, one of the bar piano players let us know that what we were doing wasn’t the smartest and that we should be focusing on our career and we are making excuses for not working towards our life career. All I can say is that I am more happy now than I have ever been in my life. Spending this time with Kevin has meant more to me than anything and some days it’s still not enough!

The train that picked us up was the famous Alaskan train. We sat up top that was all glass and then during we stepped downstairs to have dinner. It was one of the most relaxing train rides ever. I was entertained the entire time that I forgot to take pictures. I couldn’t get enough of it.  I highly suggest anyone doing this as part of the land cruise. You see so much more than you would in a plane or car. It was one of the highlights!

Dinner with the family on the train.